Looking at an Oregon Atlas, Wallowa-Whitman National Forest map, or even the very detailed and usually accurate Wallowa Valley Ranger District map would have you believe that there is a trail numbered 1725 coming off Table Mountain and heading down into Joseph Creek.  I tried to find that trail several years ago.  I even had my GPS and walked to the exact point it was supposed to start and then zig-zagged down the mountain side trying to pick up a piece of the old trail.  I eventually came to a bluff and took the easiest route around and down to Joseph Creek, giving up on the idea of the trail being there.  I have stated multiple times that trail #1725 does not exist, but there it is on the map taunting me and over the past several years, working a small doubt into my mind, “Maybe there is a trail there and I just didn’t find it.”  I hate nagging doubts and decided to head to Table Mountain again to see if I could find the elusive trail # 1725.

I had two other good reasons to head to Table Mountain.  I had made my legs work much harder than they wanted to the weekend before hiking in and out of Joseph Creek in a short time frame while not being physically up for it.  Now with 4 or 5 days of recovery I didn’t want to give my legs too much rest and decided it was time to give them another strenuous hike.

If you stop at the Joseph Creek viewpoint and read the information boards you will read that in the 1870’s the American Cavalry burned a Wallowa Nez Perce cache of Camas in a cave that is just out of sight from the viewpoint.  I had not remembered seeing this cave when hiking this section a few years earlier and after my good fortune of finding pictographs on a different section of Joseph Creek, well I wanted to see this cave also and look around for more pictographs.

First order of business was finding the mythical trail.  I once again started where it should have started and began working my way down the mountain side.  I again came to a bluff with no path down.  This time rather than make my way to the left and down (the easier route I took last time), I went right and tried to find paths down through the rock bluff.  I crawled and climbed my way up and down multiple times trying to find a way down through the bluff slipping and sliding through basalt talus and the occasional small bit of soil.  Each possible new path would come to an impassible drop off and I would have to climb my way back up through the rocks and keep searching further right.  I spent a lot of time doing this until I was way farther right of the ridge that the “trail” was supposed to go down.  Eventually I had to climb my way back up and retrace my steps back to where I started.  There were no paths down.  Maps, you are wrong.  It would be nice if someone would fix those maps so I don’t get another nagging doubt in my mind years from now and have to waste a bunch of time working my way through the steep basalt for a third time.

I suspect this mythical trail is probably one of those map drawing errors.  There was probably a trail close to here sometime long ago.  But someone screwed up once and drew it in the wrong spot.  Now the “real trail” is forgotten and we only have a trail drawn down a ridge that is only passable for animals with wings or a death wish.

While I was hiking I still had some doubts (perhaps they only drew the top part of the trail wrong) so I made my way down the rock bluffs to the left and then made my way back to the right under the rock bluffs to see if I could pick up a trail.  I found nothing again, but I worked my way down the ridge the trail was supposed to follow anyway.  I can now put my nagging doubts to rest once again, there is no trail #1725 and if it ever existed, its real location is kept top secret by the Forest Service for some unknown reason. 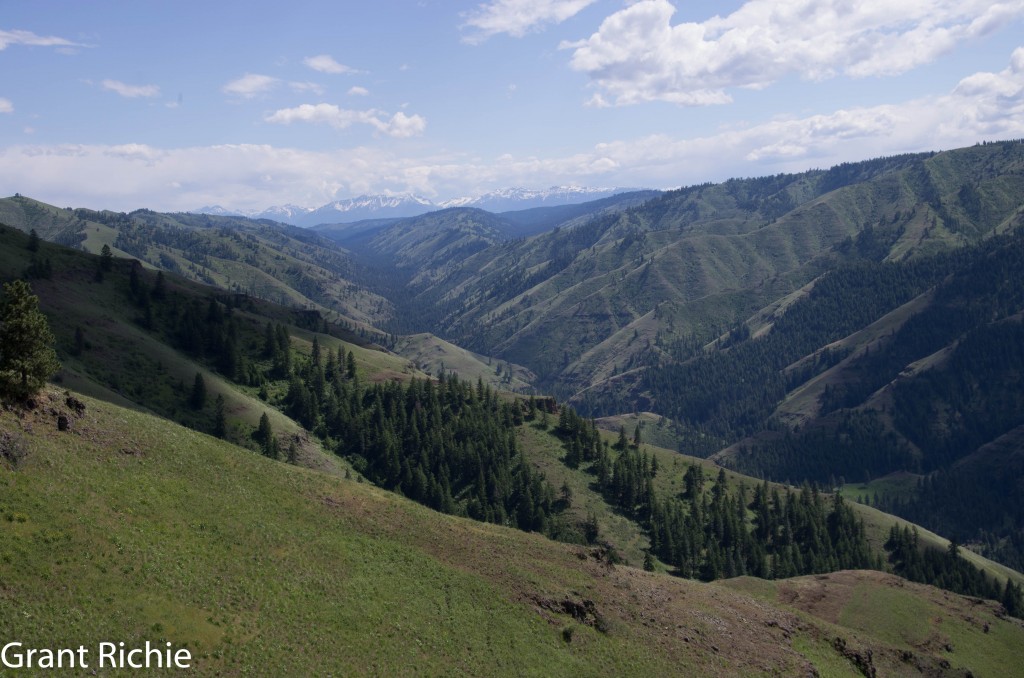 Joseph Canyon with Swamp Creek and Wallowa Mountains in background

It was a fairly uneventful trip.  This was another two day trip that was more about hiking and getting my legs and lungs back into shape.  I fished lightly near camp on Saturday evening, but did not roam too far.  Sunday I fished my way downstream a couple miles and re-examined the remains of an old homestead and all of its farming equipment. 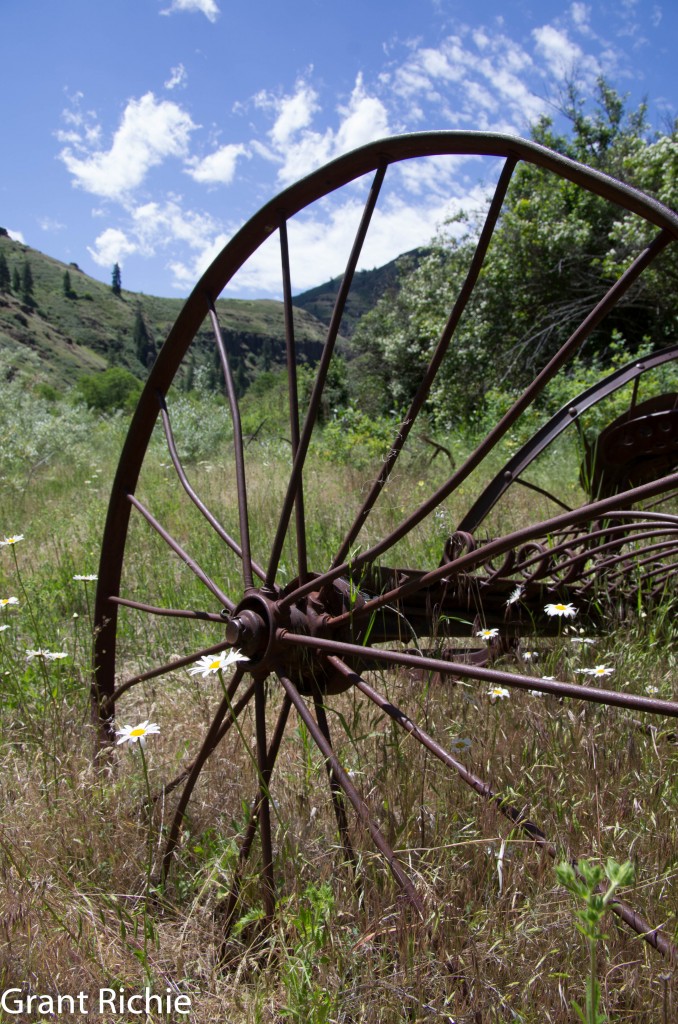 I then fished my way back upstream, picking up my gear at camp before heading further upstream to try and locate the cave.  I found a good sized rattle snake first. 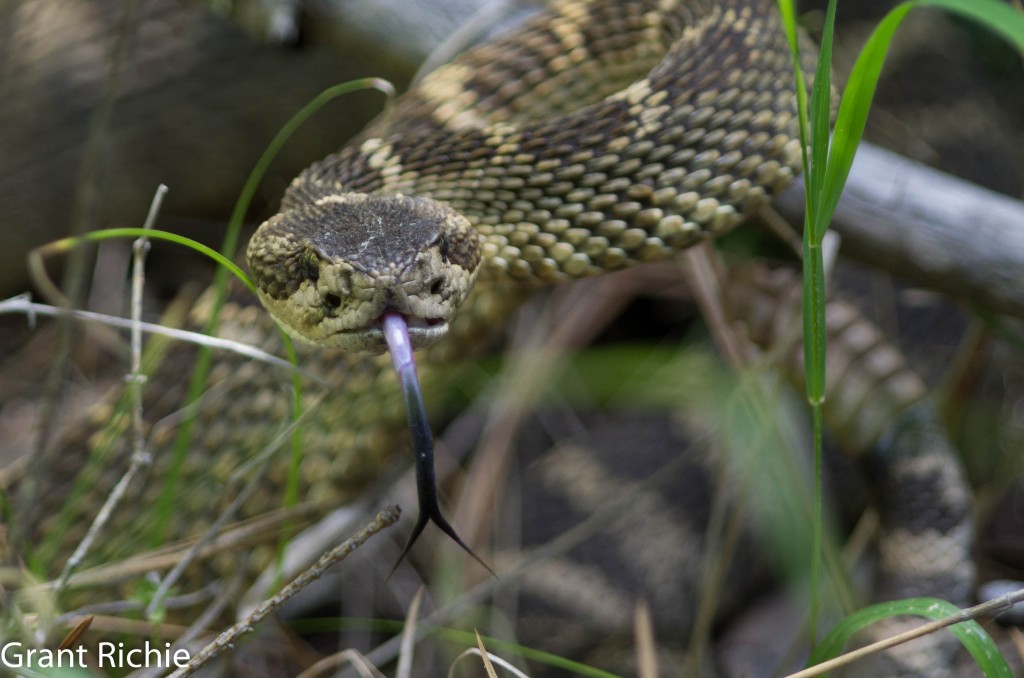 When I found the cave I remembered the water just below it well, but not the cave.  I fished this section of creek on my second trip into Joseph Creek several years ago and caught many fish below the cave including my very first Chiselmouth.  I had never seen one before, so this fish was very intriguing to me.  I crossed the creek and looked around in the cave but there was nothing to make it look historically significant, no pictographs or smoke damage left on the walls from the cavalry burning the camas cache.  But this was the cave.  There is no other that fits the description in this section of creek.  There are also excellent meadows near it which would have made great winter, spring, or summer camps for the Nez Perce.  As I walk these sections it is easy for me to imagine tepees set up in the tall grass and horses grazing the excellent bunchgrass on the steep canyon walls.  It would have been a great place to live at certain times of year.

Click picture to see more photos from this trip

Hiking the 2,500 foot elevation gain out of the canyon after a 5 mile hike during the day was another work out.  Not quite as bad as the weekend before, but the after effects were about the same when I tried to get out of my Explorer after the drive home: my feet and legs were stiff and did not want to function.  Next weekend should be better still.  Click the picture above to see more photos.