For the remainder of October and on into November I continued to learn what runs, riffles, and pools steelhead liked to wait in between Minam and Powwatka bridge.  Each weekend the days grew a little shorter and the nights a little colder.  The steelhead fishing improved with each trip as well.  By the first week of November I was only wishing for longer days and warmer nights to go along with the willing steelhead.  On one of these trips Jeff joined me for the first 10 miles on the Wallowa and then hiked out to Palmer Junction to his car.  Other than that, I did all of these trips solo, so picture taking was sparse and I always wished I had more time to fish each day as the sun went down.  Click on the big steelhead below for more pictures.

In February I took the boys on a couple day steelhead trip.  Full trip report for that weekend can be found here. 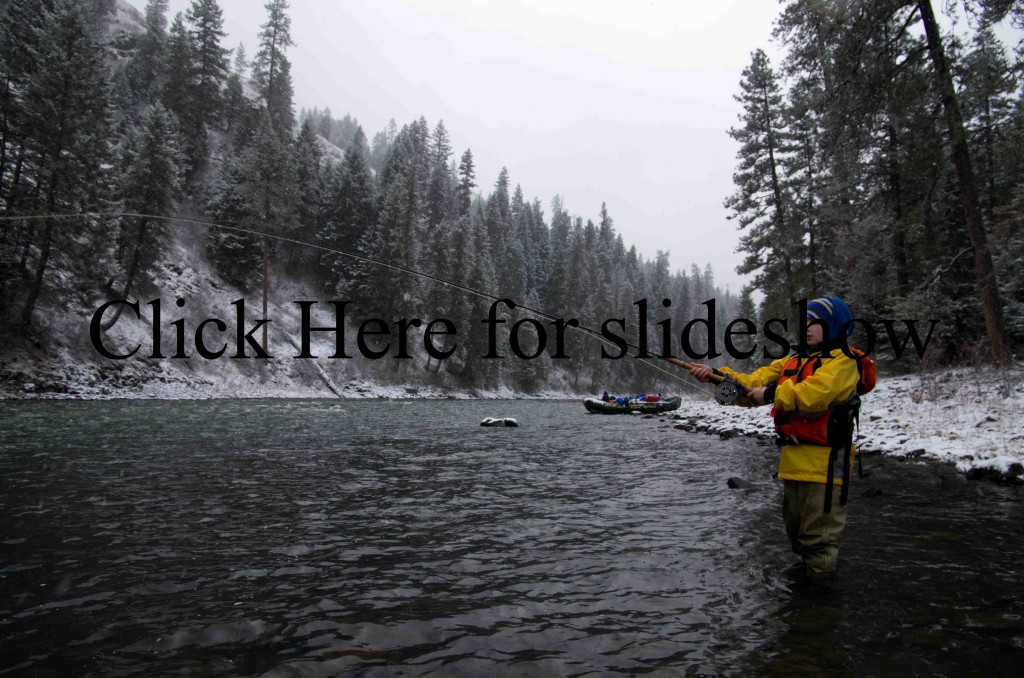 We got one last family trip in before the steelhead season ended.  I typically don’t do much steelhead fishing by the time April comes around, but the last weekend of steelhead season lined up with our weekend to have the boys.  I decided that we should take two rafts so the boys could have more room to fish in the rafts and Lottie and I rowed separate rafts.  I had hoped to spend the majority of our time on the Wallowa since it was clear and the Grande Ronde was high and muddy. 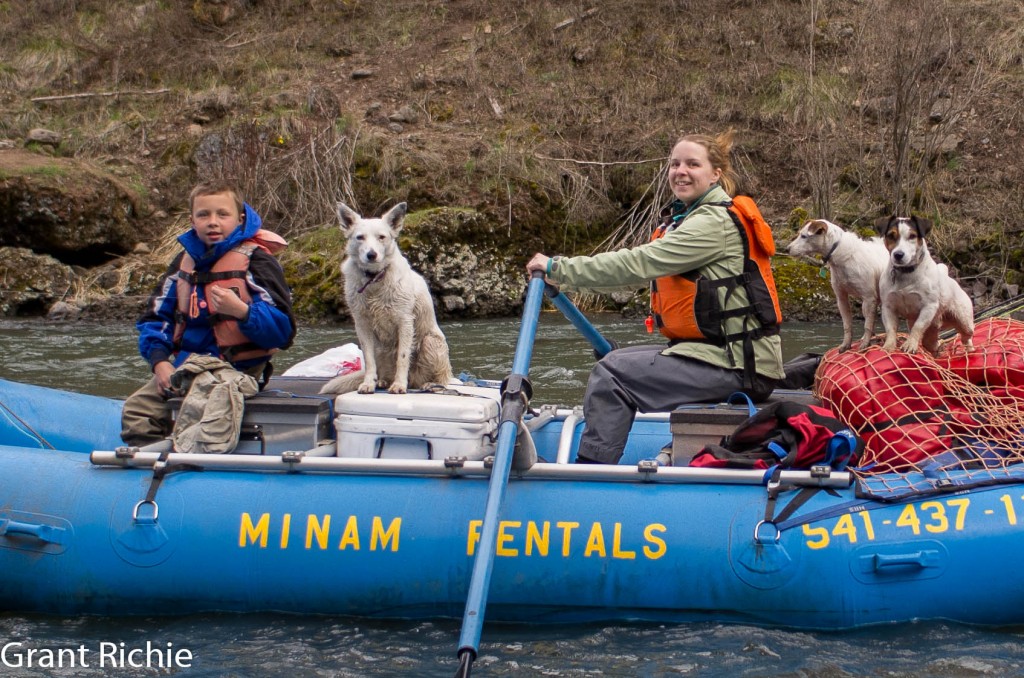 Lottie rowing with Mason in front

At our first stop I caught three steelhead and snapped my Quickline 7-weight switch rod into three pieces.  That was a disappointing start to our trip.  I had built a switch rod on the Quickline blanks after liking what PacBay had to say about them and after looking at the price, I couldn’t pass up giving them a trial run.  The Quickline switch rod quickly became my favorite out of the 3 that I had.

Grant with a Wallowa steelhead

Last fall I had planned on building a Batson 7 weight switch rod before I took a week off at the beginning of November to fly fish for steelhead on the Grande Ronde.  I ordered my blanks and components off ebay well in advance from a brick and mortar store out of Boise.  The store however seemed to have misplaced my order and by the time they finally got around to shipping it, I did not have enough time left to build the rod.  As a last minute back up plan I bought a factory built St. Criox Imperial Switch Rod in a 7 weight.  The St. Criox was probably the worst money I have spent on a fly rod.  The cork began to fall apart quickly and the rod feels more like a broom stick than a fly rod.  I eventually received my Batson blanks and components and built that rod which feels good and casts good, but I find myself wanting a little more reach with it sometimes on the Grande Ronde.  The Batson is perfect for casting a heavy setup on the Wenaha or Wallowa though.  The Quickline has plenty of power, has plenty of feel to it, does not feel like a broomstick, and is a hell of a deal when you compare it to other switch rods.

Back to the trip.  After landing three steelhead and snapping my rod into pieces, Lottie found a colorful wooden toilet seat on the bank of the river.  Although it was quite nice, we through it into our firewood pile on the raft for that nights fire.  The rest of our trip had a few hiccups.

I had wanted to camp well upstream of Rondowa and Kimmel knowing that the Boise Cascade road into Rondowa had opened April 1st to the public and there is one jet boat that comes up the Wallowa as well.  I signaled to Lottie that I was going to try and take out at a difficult spot.  She apparently didn’t get my signal though and by the time she got her raft over to me she had enough velocity that it simply bounced my raft back out into the fast current.  So down the river we went to find another campsite.  We eventually found a nice grassy bench on the BLM side, but I was much farther downstream of where I wanted to be.

The next morning as we packed our gear into the raft the jet boat made its way upstream and began fishing just below our camp.  I could also hear 4 wheelers heading down the hill from time to time as they made their way to Rondowa and points in between.  That was the end of the fishing for me.  I simply put my rod away and decided it was a rafting trip the rest of the way.  We stopped at a couple spots along the lower Wallowa to let the kids fish, but I need a lot of elbow room.

The rest of the trip was still quite enjoyable.  I hiked up several ridges and did some exploring.  Coming around one bend in the river I spotted two mountain goats in the rocks and quickly began rowing hard to take out below them.  I grabbed my long lens out of my dry box and began making my way up a rock bluff.  I was going as quickly and quietly as I could hoping to get a good picture of the goats.  Kolby and Brenden scrambled up through the rocks with me while Lottie and Mason kept the dogs and boats down at the river.

I began thinking that the goats had wandered off until I came around a large basalt outcrop and they were right above us looking down.  I stopped and moved as slowly as I could to take some pictures.  They knew I was there and were staring at me, I just didn’t want to scare them off.  I took several pictures from one spot and then worked my way across the bluff to get a different angle.  After staring at us for a while the goats slowly meandered up hill out of sight.  I waited a few seconds and then started to look for a way up the next rock bluff.  About that time the two goats came charging back down like they were going to jump right over the bluff at us.  They stopped at the edge, but I have to admit my heart rate went up.  I decided we were close enough.  The goats continued to act their bluff several more times, just waiting for me to try and come up over the rocks so they could knock me back down.

I slowly worked my way around to the side of them as they acted out their routine.  I had the kids hide lower down just to be safe and as I made my way up further I made sure I had a good obstacle between the goats and I just in case they decided to quit bluffing.  Eventually the goats did not come back around and I told the kids to wait down there for me and I tried to circle way up and around to get up hill of the goats.

I went well up from where they were and began slowly, quietly, and carefully down to where I had seen them last until there was only a small knob between me and where I had seen them last.  The only way I was going to find out if they were there was to walk right down around the knob which would have put us face to face if they were still there.  I decided I probably had some good shots already and made my way down the other side back to where the boys were waiting.  To see more pictures click the picture below. 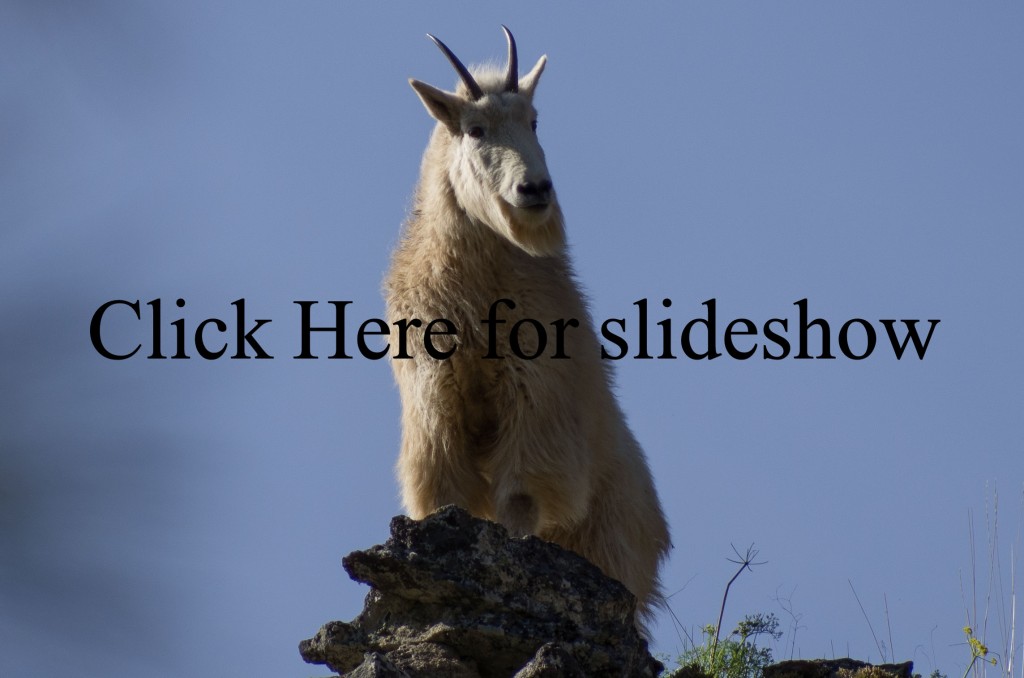