Rafting, rafting, and rafting the Wallowa and Grande Ronde Rivers between Minam and Troy Part One

An important aspect of owning a business is knowing your product well.  With a rafting  business, the main product is your river.  When my wife, Lottie, and I bought the Minam Raft Rental and shuttle business last year on the Grande Ronde I took it upon myself to make sure I knew the river well.  It has been tough; I have had to take so many rafting trips down the Wallowa and Grande Ronde Rivers now that I can’t even count them all.  I know; it is a rough job being in the research department of Minam Raft Rentals.  I have to try all kinds of different fly patterns for steelhead and rainbow trout, hike and explore different ridges on the river in the 40 mile roadless section that we operate on.  I had planned on doing write ups of each and every trip, but I have a paying day job the rest of the week so the writing has too often been neglected.  So this post will be a bit of a brief recap of several trips with lots of pictures to look at.  Each picture will provide a link to more pictures of that same trip.  So if you want to see more pictures for any of the trips I mention, just click the picture below it to see the full set.

Last fall I took it upon myself to learn every nook and cranny between Minam and Powwatka bridge where steelhead might like to hang out.  Although I had fished sections of the Grande Ronde many times by hiking in, there lay a good 30 miles that I had never fished for steelhead.  In September I began my “research” on steelhead movements between Minam and Powwatka bridge.  I was happy to find that some steelhead are in our section of the Grande Ronde as early as late September and are perfectly happy to bite Olive Woolly buggers.  On this trip I also had to keep Mason from eating a scrumptious looking frog.  The boys caught many rainbows and I caught the first steelhead of the season.  Click the image below for more pictures. 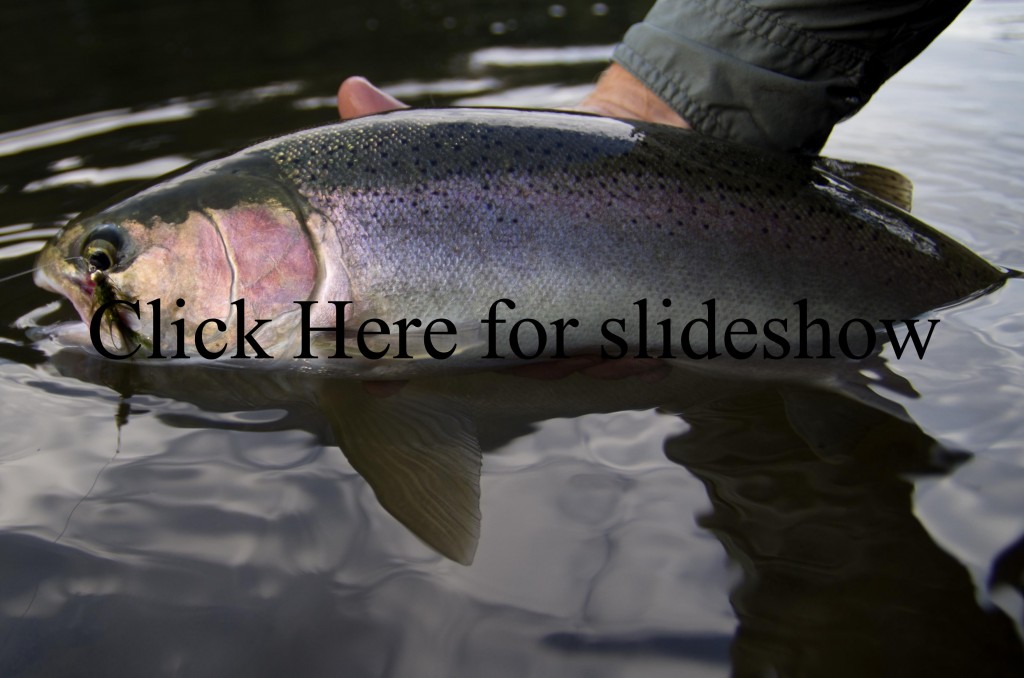 The following weekend Lottie and I went down the Grande Ronde with flows down around 600 cfs.  There was plenty of rock dodging to do, but Lottie did a pretty good job even if she did throw poor Ed out of the raft once when she didn’t see a rock.  Poor Ed, he was enjoying an afternoon snooze on the river and then was plummeted into a river and swimming like crazy.  Fortunately Ed is a good natured dog who doesn’t hold a grudge and I think he forgave Lottie eventually.  Besides rocks to navigate around at 600 cfs, there were also huge bull Elk in the middle of the river.  This weekend saw multiple steelhead hooked but none landed just below Sheep Creek rapid.  After losing two consecutive steelhead, the Olive Woolly Bugger once again showed its versatility by landing a large fall Chinook.  I thought I was doing battle with the steelhead of a lifetime until I finally got him close to shore and released.  Not a bad weekend, I love having the canyon to ourselves.  Again, click the picture to see more pictures of this second September reconnaissance trip for steelhead. 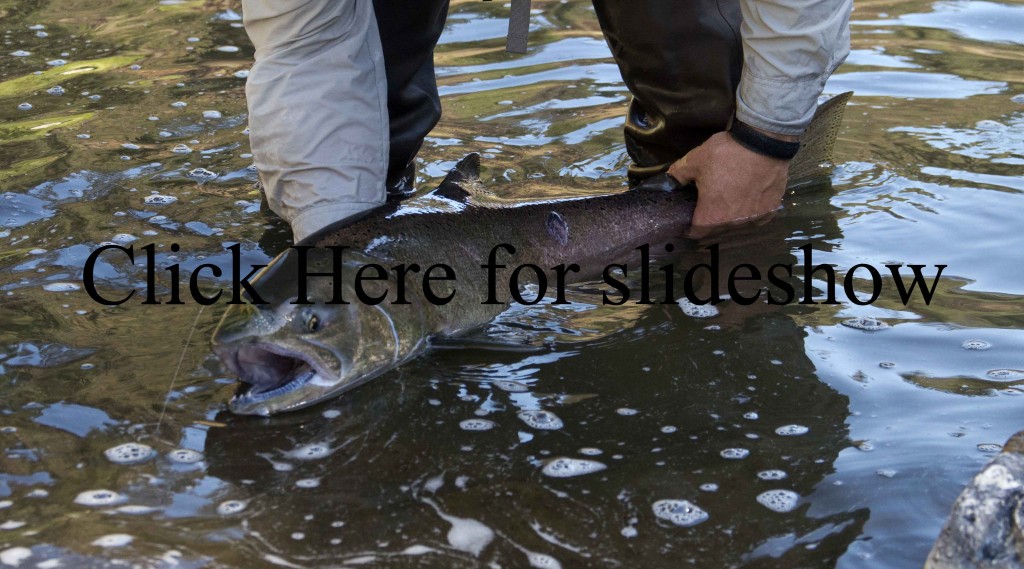 After this trip I gave the Grande Ronde a break for two weekends and met up with friends from Boise to fish the Imnaha.  Now the Imnaha is a fun little river that is well out of the way, but the steelhead runs seemed to be a bit off this year.  Almost no fish were in the Imnaha itself, but some could be found at the mouth where the Imnaha flows into the huge Snake River.  And indeed, in the late afternoon, steelhead could be seen jumping happily out in the Snake River and sometimes even in the mouth of the Imnaha.  We were catching some steelhead, but not a lot and it was really irritating me that all these beautiful steelhead were consistently jumping out in the Snake rather than jumping on the end of my line.  I began to try every dry fly I had.  Every emerger and near surface pattern and technique I could think of also.  After having no success I finally came up with a perfectly logical explanation that continued to produce no jumping steelhead on the end of my line.

My logic went like this: I looked into my flybox and saw that I had tried nearly every pattern except one.  I had about 4 of a Barr’s Cranefly larva.  Cranefly are chironomids that look like mosquitoes, but are usually bigger and don’t suck your blood.  They often lay their eggs in moist soil along river banks I have read.  I think they also may lay eggs in rivers sometimes.  At any rate, high flows below dams can wash out this big fat worm looking cranefly larva.  Ahh . . .  I thought.  The perfect explanation.  I have one fly pattern left in this box I haven’t tried, a cranefly larva.  I also believe the steelhead migration up the Imnaha is being messed up by unseasonably high flows on the Snake River.  We had a very high snowpack in the winter of 2010 and 2011 which led to the Snake River reservoir upstream of the Imnaha having too much water left over at the end of the year.  Now the dam operators were dumping huge amounts of water through the dam, screwing up the steelheads sense of timing to go up the Imnaha, and presumably washing out so many cranefly larva off the banks with the unseasonably high water that the steelhead were only eating cranefly larva which also happened to be the last fly pattern in my box that I had not tried.  So logically I tied on the cranefly larva and continued to not catch those jumping steelhead in the Snake.  Click the picture below to see more pictures from these two weekends. 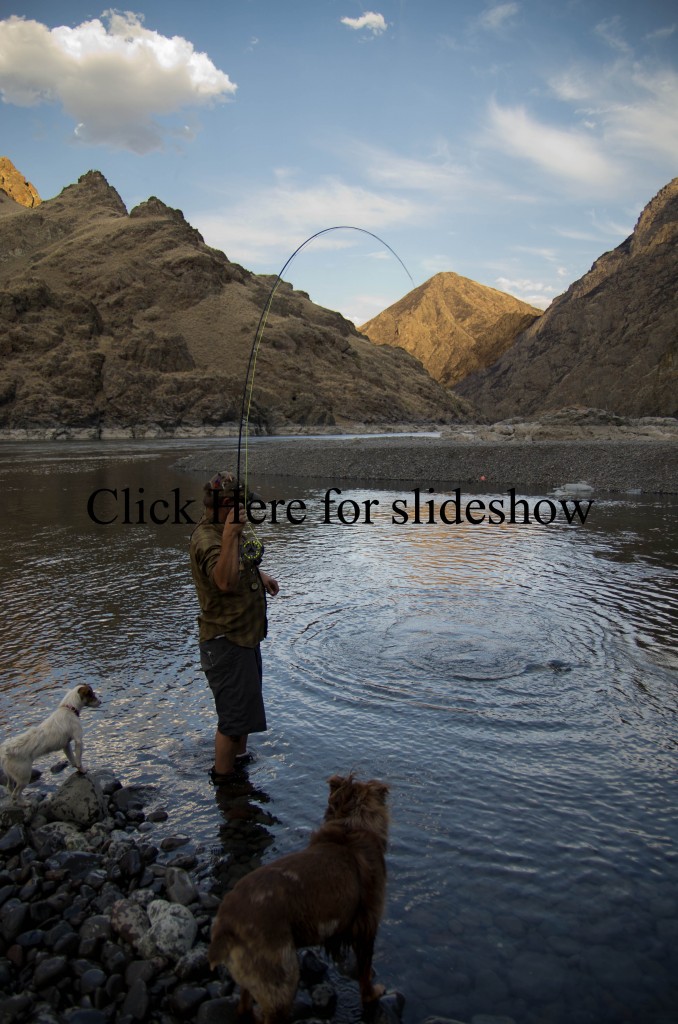 My next trip down the Grande Ronde was with the kids in the middle of October.  As sole adult, rower, camp setter upper, camp cook, etc., I did not have much time to fish or take pictures and we only had two days to make the float and fish.  So we had a great time seeing the fall colors take over the canyon, caught some nice rainbows, I landed one steelhead at camp between setting up camp and beginning to make dinner, but I did so little fishing I was quite happy to hook and land one steelhead.  I think I spent 20 minutes fishing to catch that one steelhead, so mathematically I would have caught 24 steelhead a day if I had fished 8 hours a day.  I like that kind of logic.  Unfortantely I did not get any pictures of that steelhead, but I did get a few pictures of large Grande Ronde rainbows that like to eat streamers.  Again click the picture below to see more photos from this trip. 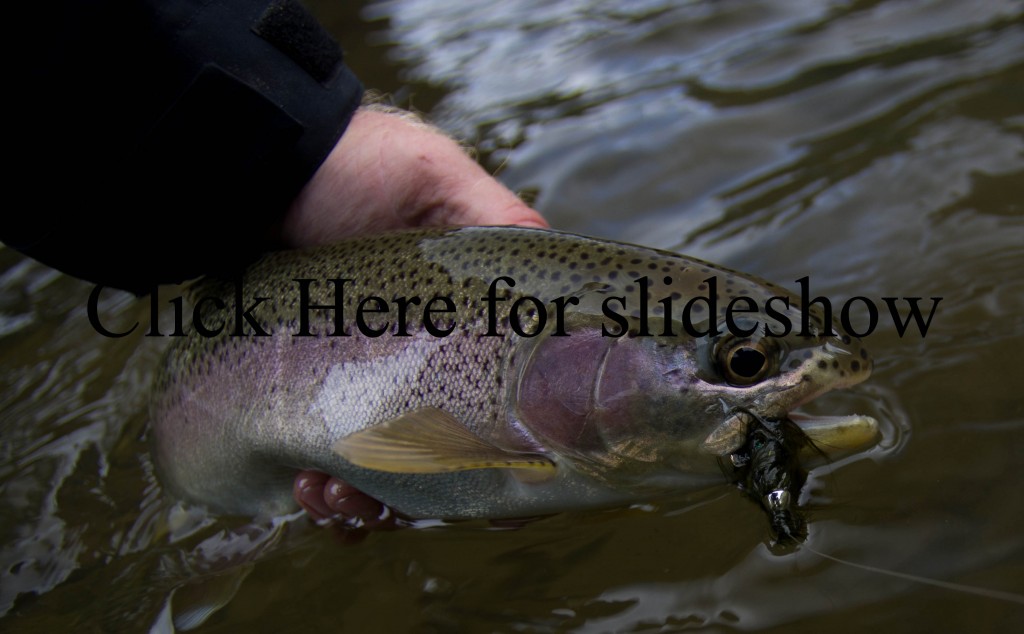 Putting those albums together has consumed another evening, so more to come in Part Two . . .