Although I had heard of a packraft before, they did not really catch my interest until I saw Greg Topf with one on the Wenaha last year.  I was intrigued, but felt a little weary about their durability.  When I met Greg, I was floating the Wenaha in an inflatable kayak.  That was my third trip floating the Wenaha and each time has been with a different inflatable craft.  The first time was in a small 8 foot pontoon boat.  It worked well, but was a lot of work to get to the river.  My second trip was in a Scadden Escalade with oar mounts.  This boat is basically a small inflatable kayak, with small oars mounted on the tubes, and a hole in the front so you can stand up in the middle and fish or portage quickly around obstacles or over shallow gravel bars.  The last float was in an Aire inflatable kayak.  All three boats worked well once I got them to the water, but they are relatively heavy for hiking in places.  The NRS packraft weighs in at a mere 4.8 pounds.  That sounds nice for a pack in inflatable.

At the end of our rafting season last year we decided to buy two NRS packrafts to try out and if they held up to my use we would rent them out at the store.  I never had a good opportunity to test one out last fall but with last Sunday promising good weather and the need to pick up a rented raft in Troy at the end of the day, I thought there was no better time to hike up the Wenaha with an NRS packraft for a trial run.

Jeff joined me as co-test pilot which gave me a much better opportunity to get some picture taking done as well.  We headed out early and arrived at the Wenaha camping area near Troy mid-morning.  With the two NRS packrafts we had picked up a pair of NRS Paragon Packs.  The Paragon pack is a backpack harness system that allows you to attach a drybag and paddle to it.  After putting the packrafts, inflation bags, lunch, and a few odds and ends into our drybags we cinched them into the Paragon packs and began fishing our way upstream. 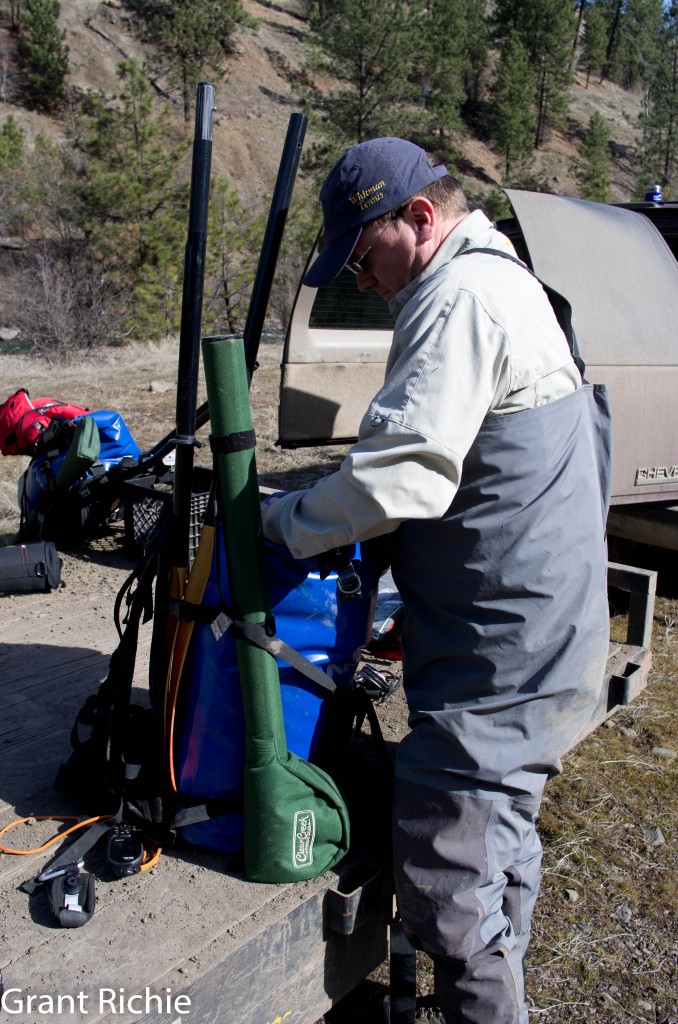 The Paragon packs worked well, but it felt like it was a little undersized for my frame.  It worked well enough and I was pretty comfortable fishing my way upstream with it for most of the day.  If a person had a good pack that fit them well, they would probably be better using it and carrying a big enough drybag that the pack would fit in, or simply strap the empty pack to the pack raft and let it get wet.  In most situations you would not need to use the pack once you are to the river anyway, so it wouldn’t really matter if it became wet during the float back.

The day was beautiful and warm and I had dressed with too many layers.  The Wenaha had lost its crystal clear quality and gained a slight greenish blue hue from snowmelt.  It was not too high to wade and Jeff and I fished our way upstream a couple of miles.  We were both recovering from colds and not 100% healthy so we were not pushing it.  We were simply enjoying the day out on the river.  I could have been perfectly happy to walk up the canyon with my camera and then blow up the raft and float back to our vehicle.  It almost felt like an early summer day it was so nice.

Jeff spotted a bighorn sheep appear on the skyline and I got out my long lens to try and capture a few pictures.  After a few minutes of watching the sheep a hiker appeared on the trail above us and the sheep ran out of sight.  We decided it was getting close to time to inflate the boats and head back so we walked part way up the ridge to the trail to see if we could spot the sheep for some closer pictures and then walked upstream to Dry Gulch so we would at least have 3 miles to float back in the packrafts.

From the time we opened our dry bags to begin setting up the rafts until we had them inflated, on the water, and our gear lashed down and ready to go was a mere 20 minutes.  I thought that was pretty good for our first time.  Directly downstream was a short wave-train and it felt a little odd having the drybag lashed to the front of the small pack raft.  To be honest, when I hit the first wave the drybag began to come my direction and I wasn’t sure it was going to stop.  It did of course and the packraft handled the wave fine.  We zoomed past the next couple miles getting a feel for the small rafts.  Less than a mile upstream of the parking area was a small rapid that I thought would be a good test for the packrafts and a good photo opportunity as well. 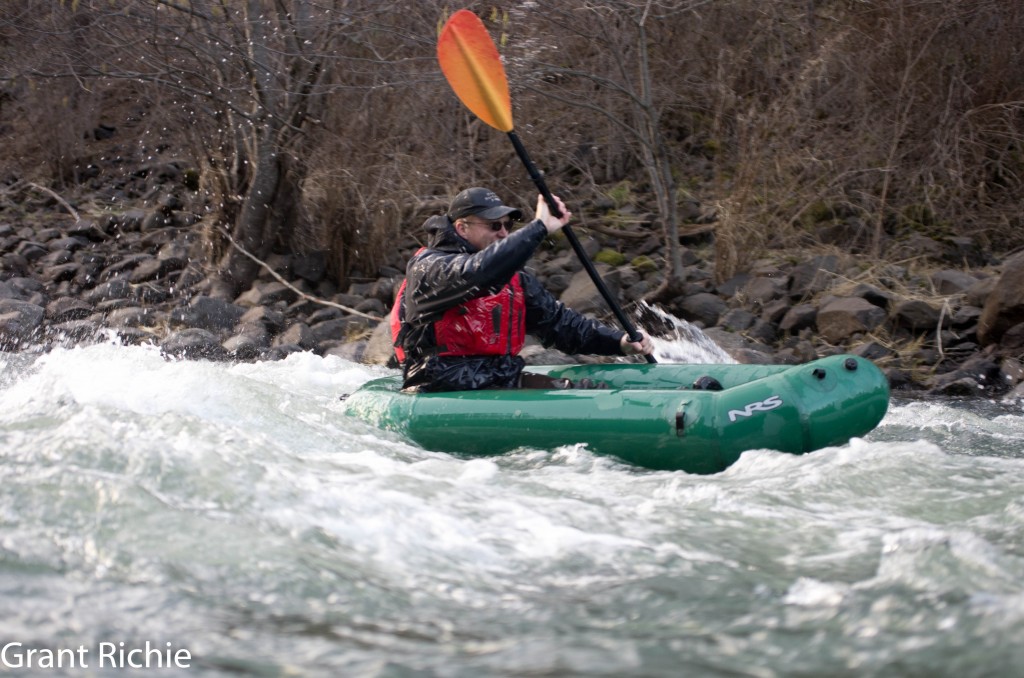 Grant packrafting on the lower Wenaha

We beached the packrafts and Jeff got in position to take some pictures.  I honestly was not sure if the pack raft would handle the rapid.  I had a small nagging feeling in the back of my mind that it might fold in half and sink when I hit the wave.  But I was wearing a lifejacket and the river was wade-able a short distance down from the rapid so I wasn’t too worried.

I lined up the small NRS packraft and punched the wave head on.  I got a good soaking but the packraft handled it with ease.  I eddied out laughing and walked upstream to take pictures of Jeff as he punched the wave with his NRS packraft.  Again no problems.  I was feeling a little more comfortable with the packraft by now and I decided I would carry it back upstream and do it a second time with the drybag off the front.  With no drybag on the front the packraft became even more responsive and I ran the rapid a second time while Jeff took more pictures. 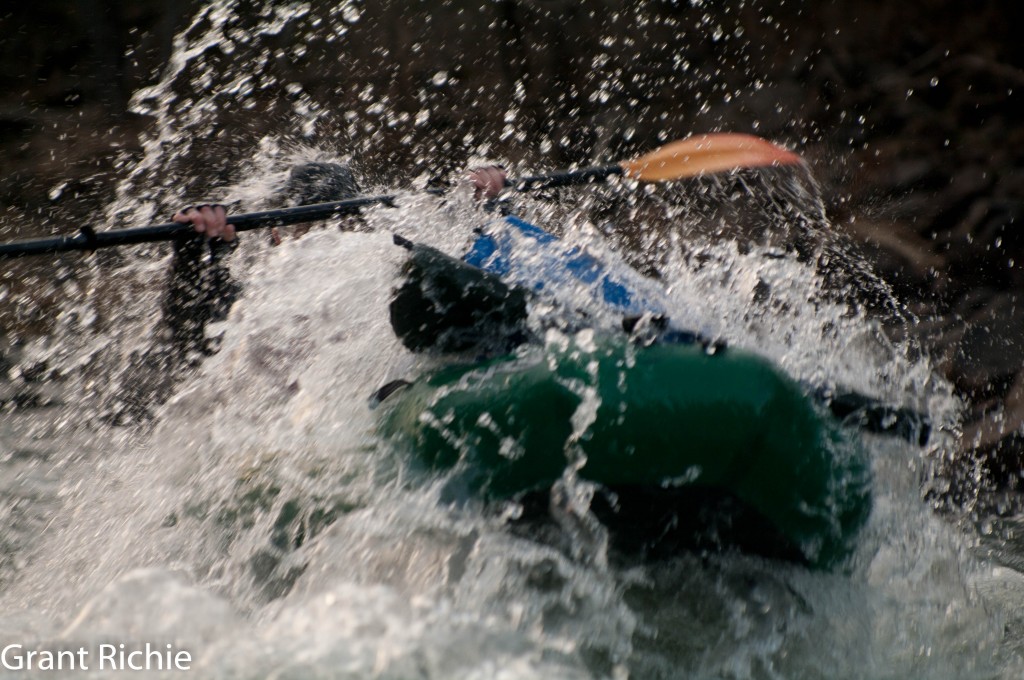 Grant packrafting on the lower Wenaha

Packrafts are fun.  I am going to give these little NRS boats a thorough testing this spring and summer.  The only downfall I see so far is the lack of a spray skirt, which NRS tells me they will have available later this year.  With no spray skirt and splashy water, you will have to stop and dump the water out every couple miles.

The NRS packrafts passed their first test.  They handled a decent wave and did not pop running over shallow rocks.  So far so good . . .

This entry was posted in packraft, Wenaha. Bookmark the permalink.

6 Responses to Testing NRS packrafts on the Wenaha: March 4, 2012